Notes from the road: Leipzig

On this bright and clear sunny Sunday afternoon, we wondered how the band might be able to top Friday’s fun and loose performance in Mönchengladbach. But this Leipzig show in a “mighty arena,” as Bruce put it, turned out to be even stronger. Two tour premieres offered a powerful start, with a top-notch, energetic “Roulette” to open (a River outtake once released as the flip-side of “One Step Up” that later found its way to the Tracks collection) followed by a rousing E Street version of “Lucky Town.” Strong guitar work from Bruce and Steve on this underplayed 1992 track, Bruce’s driving solo way up front and shining with passion and sheer energy.

After “Badlands” and “Death to My Hometown,” it was time for requests. Getting back to party mode, “Sherry Darling” got the crowd dancing and singing, with Jake Clemons and Ed Manion sharing sax parts and bringing the song to a new level. This could only be topped by an unexpected request, the Chuck Berry classic “You Never Can Tell.” It was a fascinating moment, with Bruce and the band actually arranging the song in front of thousands of people. Bruce sought the right key by increasing pitch step-by-step, Steve shaking his head in disapproval each time until they were satisfied that it felt right. Then the brass section had to be taught how to play the song, and Bruce sang them their line, encouraging the crowd to join in and repeat it a few times so that the horns could get accommodated to a song that they had never played before.
In the end, they nailed it — an exuberant performance creating an enormous response from the crowd.

Yet another request brought us “Back in Your Arms,” introduced with a great story about pleading for a second chance, Bruce down on his knees, before the band’s subtle accompaniment supported the most passionate and skillful vocal I’ve ever heard on this song. Bruce clearly enjoyed the freedom to vary the phrasing of the words to make this rendition a true masterpiece.

During “Hungry Heart,” Bruce downed a “good German beer” as Jake continued his sax part until the cup was fully emptied. Later in the set, an unusual (particularly without Patti Scialfa present) but clearly convincing “Human Touch” provided Soozie Tyrell the chance to shine, taking Patti’s part and proving her vocal and guitar skills. On a strong “Open All Night,” the camera guys located a woman in the far back of the arena who was dancing passionately to Bruce’s amusement; she never realized that she was on the enormous screen until the very last note of the song, even though Bruce repeatedly greeted her and referred to her as his “baby.”

A mighty “Born in the U.S.A.” was dedicated to those “old enough to have seen one of the most memorable concerts ever,” referring to the legendary concert in East Berlin in 1988 that, according to recently published literature, could have been one of the events that helped the Berlin Wall to come down. Bruce recalled that the E Street Band most probably has never played to more people than in Berlin Weissensee, and that the memory would stay in their hearts forever.

“Rockin’ All Over the World” closed the dancing part of this great night, but Bruce did lot leave the Red Bull Arena without a beautiful acoustic performance of “Thunder Road,” with the crowd taking the part of the sax solo. Another night that will stay in our memory for a long time. And taking Bruce at his word, the E Street Band isn’t nearly done making memories. Introducing to “Spirit in the Night,” Bruce told the crowd that they’ve been on the road for two years now, but there is no end in sight: “We are just startin’ to get good!” 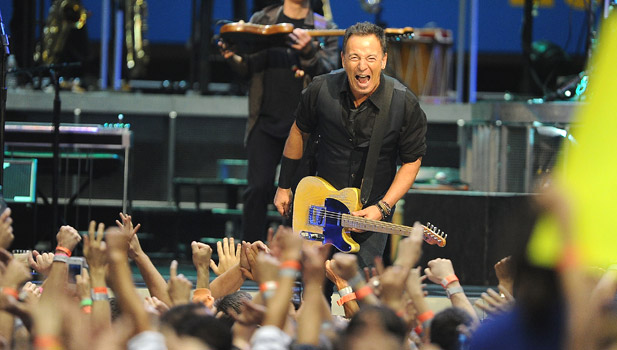 Notes from the road: Turku, Finland #1