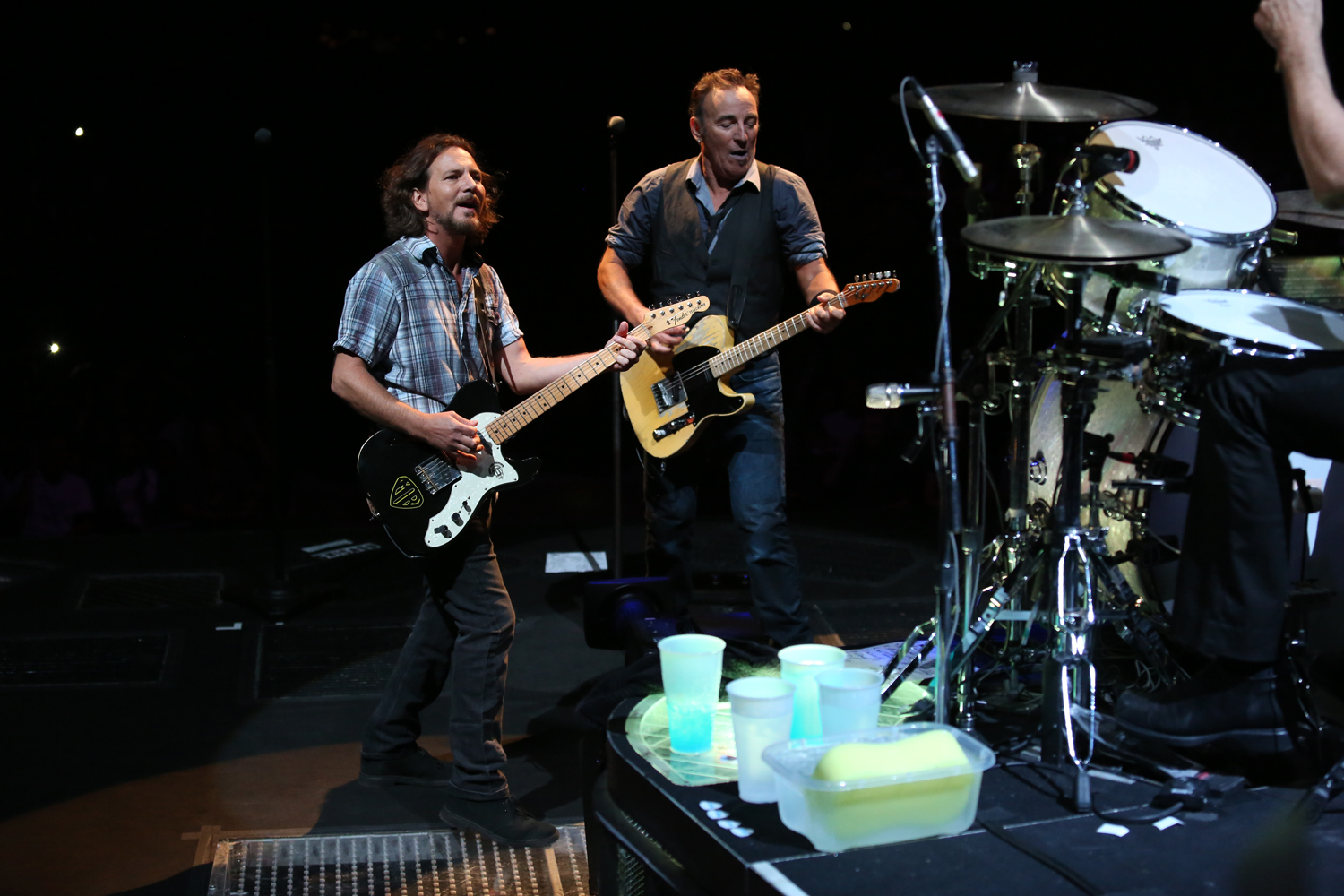 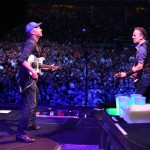 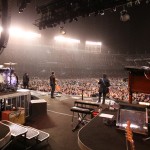 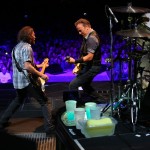 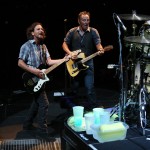 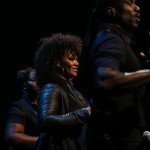 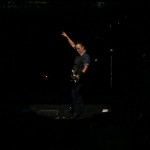 Just a few weeks after Fenway, Bruce and the E Street Band brought the Wrecking Ball tour to another historical ballpark, to “play two!” at Chicago’s Wrigley Field. The place was packed not only to the rafters, but to the rooftops: several times, Springsteen hollered to those fans gathered atop buildings across Waveland Avenue. Bruce clearly loves storied old venues like this — he talked about the ghosts that haunt “old ballparks, old cars, old guitars” — and concertgoers taking the floor were able to marvel at being so close to that famous outfield ivy. But other than a nod to “Number 10!” and a point to left field, where Ernie Banks’s retired number flag flies, Bruce was all about making new history, with a pair of special guests that helped knock these back-to-back shows out of the park.

Tom Morello and Eddie Vedder, some of Springsteen’s more recent brothers-in-arms, did their growin’ up in the Chicago area, and both are lifelong Cubs fans, so how could they resist the call to Wrigley? Each has performed on the E Street stage before, but this was an extended stay: they appeared both nights, playing different songs on each, and they looked just as fired up about the whole thing on Saturday as on Friday. As Bruce put it, it was “a cavalcade of stars!”

Morello, AKA The Nightwatchman, rocked out on “Death to My Hometown” both nights (as he did earlier this year with Bruce and the band on Late Night with Jimmy Fallon), and on Springsteen’s “The Ghost of Tom Joad,” too. “Joad” was originally an acoustic track, but the electric arrangement he and Bruce have perfected at this point owes as much to Rage Against the Machine as it does to Woody Guthrie. Morello’s soloing at the end — wailing, howling, scratching — takes the whole thing into the stratosphere. For nightly exclusives, he also brought his six-string wizardry and foot-stomping passion to “This Depression” (a Wrecking Ball live rarity) and “Jack of All Trades.”

Vedder’s concert cameos with Bruce go back ten years, to when he guested at the United Center here in Chicago on “My Hometown.” They reprised that performance at Wrigley, a moving duet made all the more poignant with Eddie being, as Bruce introduced him, a “hometown boy.” Eddie also brought incredible intensity to “Darkness on the Edge of Town” and, for the first time with Bruce, “Atlantic City.” Both guests reappeared in the encores each night to help close the shows.

Along with recurring guests, the two nights had plenty of differences. Night one was studded with mid-’80s gems, including “My Love Will Not Let You Down” (featuring a jawdropping drum breakdown from Max Weinberg); Bruce’s classic reworking of Jimmy Cliff’s “Trapped,” which had the crowd shouting along; “I’m Goin’ Down” into “Darlington County,” with Bruce donning a pink cowboy hat from the crowd and whipping through Townshend-style windmills; and a magnificent rarity in “None But the Brave,” a Born in the U.S.A. outtake later released on The Essential Bruce Springsteen, “for all the hardcore fans out there.” In the encore, Jake Clemons once again lived up to his uncle’s legacy with an impeccable solo on the chill-inducing “Jungleland.”

On night two, it was clear that we’d be getting a vastly different show, with an opening trio of songs that had been completely absent from the night before. “The Ties That Bind” has hardly sounded better, with singers Cindy Mizelle, Curtis King Jr., and Everett Bradley in their full glory; “No Surrender” was a powerhouse, as Mighty Max once again reminded us where that nickname comes from. A surprise blast from the Seeger Sessions era was the return of “Pay Me My Money Down,” bringing the whole horn section down front for a New Orleans-style house party. But the biggest difference on Saturday night came falling — pouring — from the sky. Bruce attempted to stave it off, chanting “No rain!” during “Waitin’ on a Sunny Day” and following that with an impromptu acoustic “Who’ll Stop the Rain,” but it was no use. Good thing no one seemed to mind — least of all Bruce — that the last hour or so of this Chicago stand took place during a downpour.

If anything, as the rain drenched Wrigley, the show and the crowd burned even brighter. Calling the rain “a benediction — a blessing!” Springsteen joined us out front, leaving the cover of stage to revel in it, letting himself become soaked, exhorting Steve Van Zandt join him out there on “Rosalita.” Steve laughed him off and stayed dry for a while, but soon found a Cubs hat to protect his dome and came on out.

Some two-night stands wind up with a clear consensus for which show was “better.” But with so many differences between Friday and Saturday — a full half of the setlist changed from one night to the next, making for 42 different songs played over the two nights —  it felt almost like one big show with a 21-hour intermission, all building to that rollicking rock ‘n’ roll in the rain. 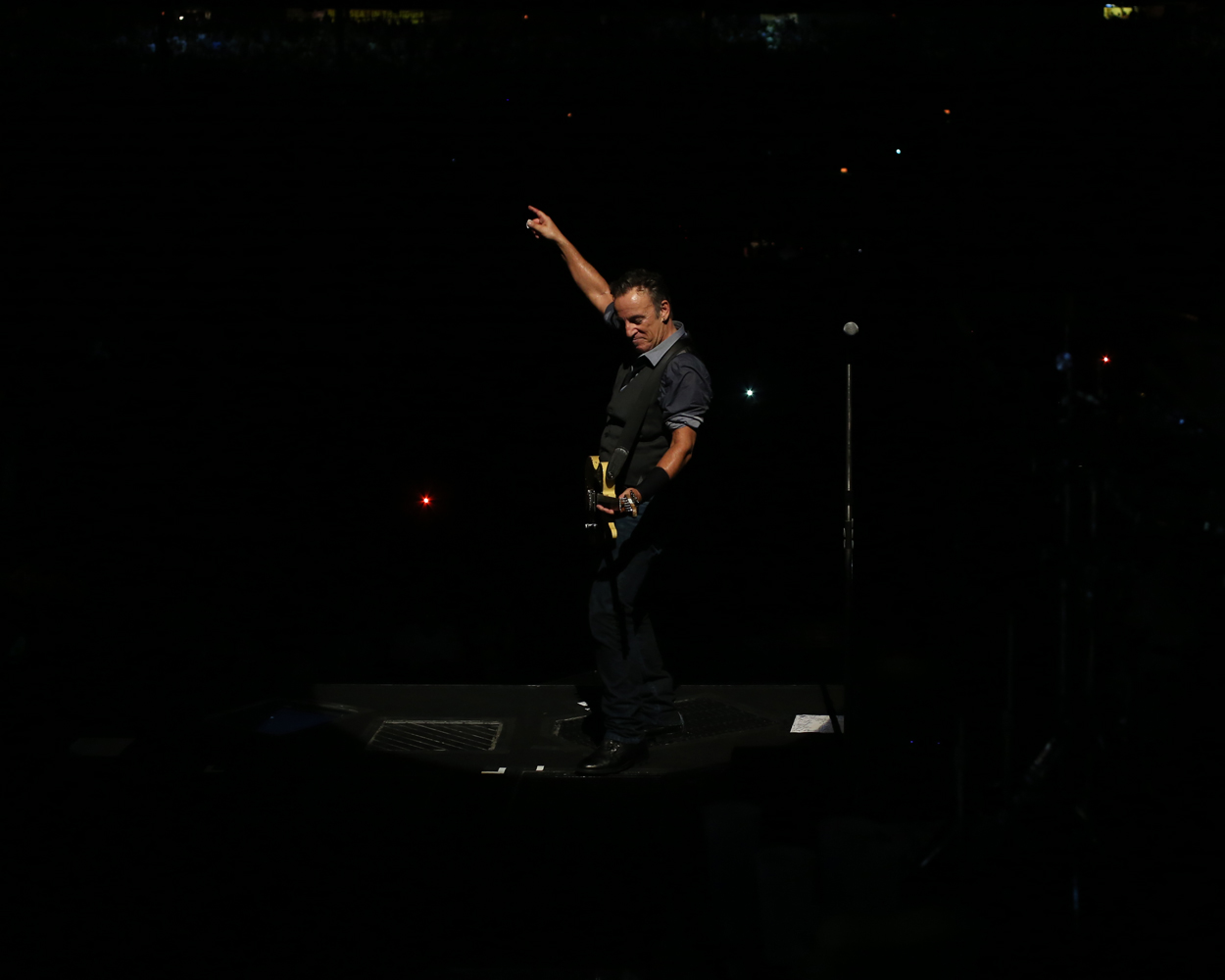 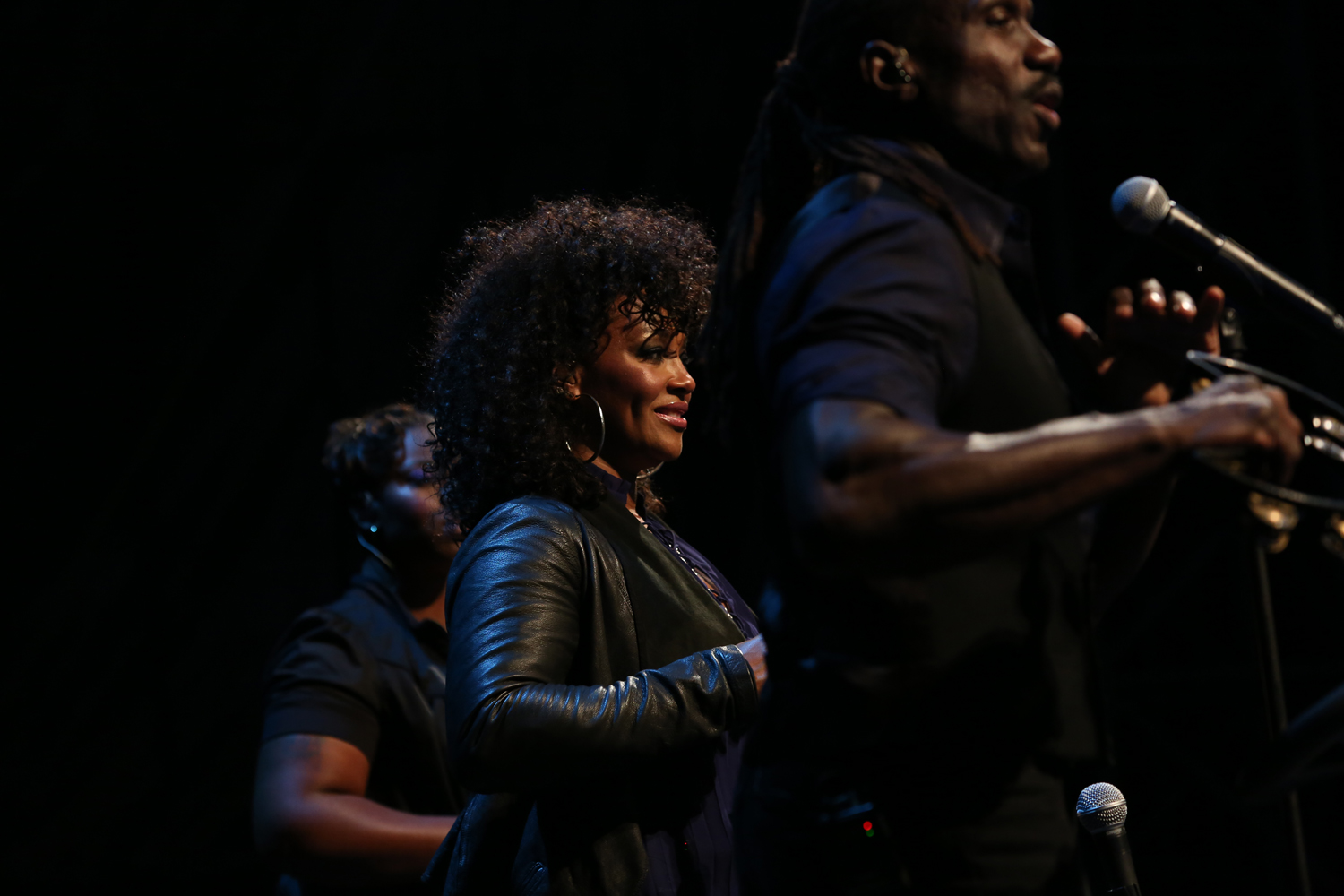 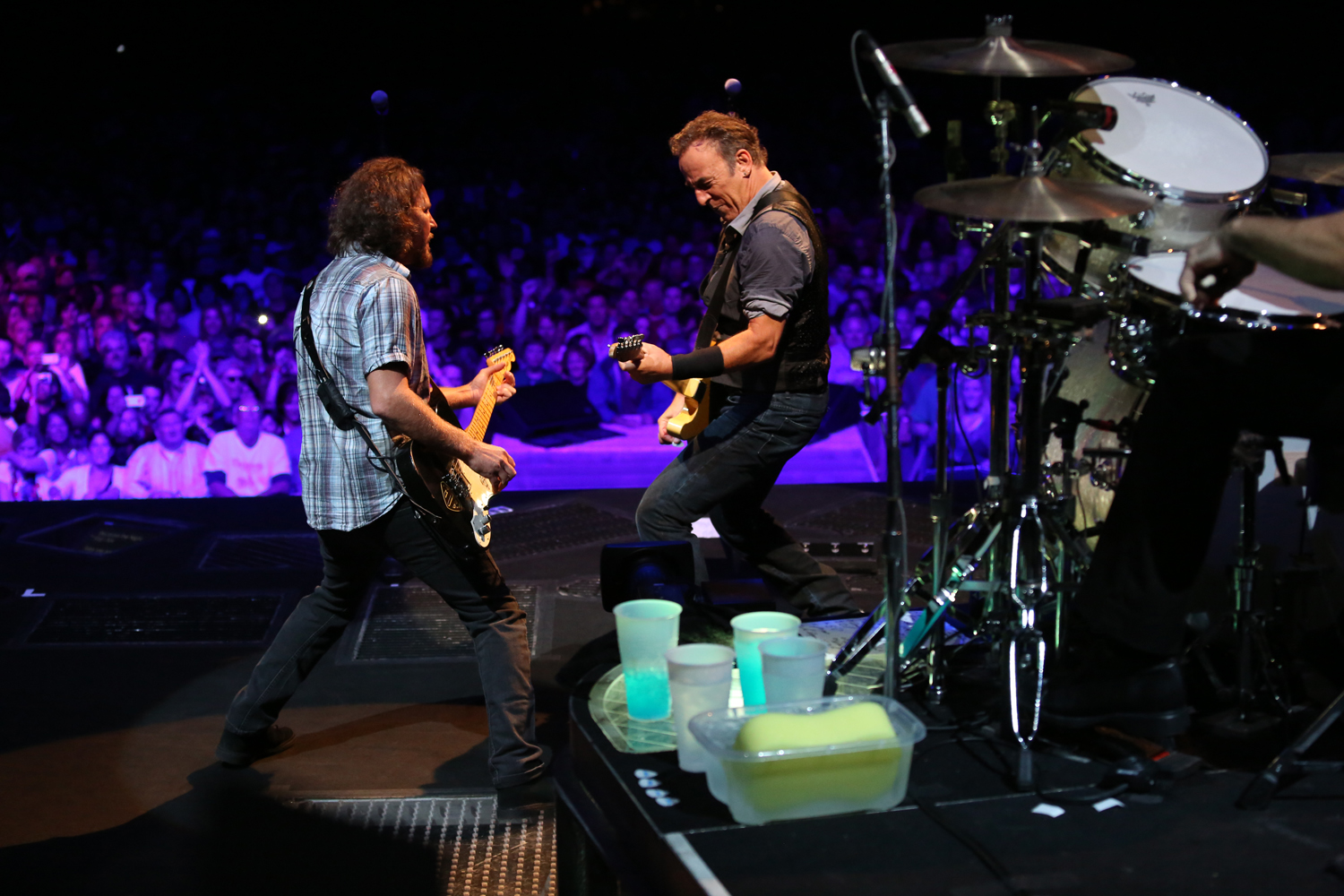 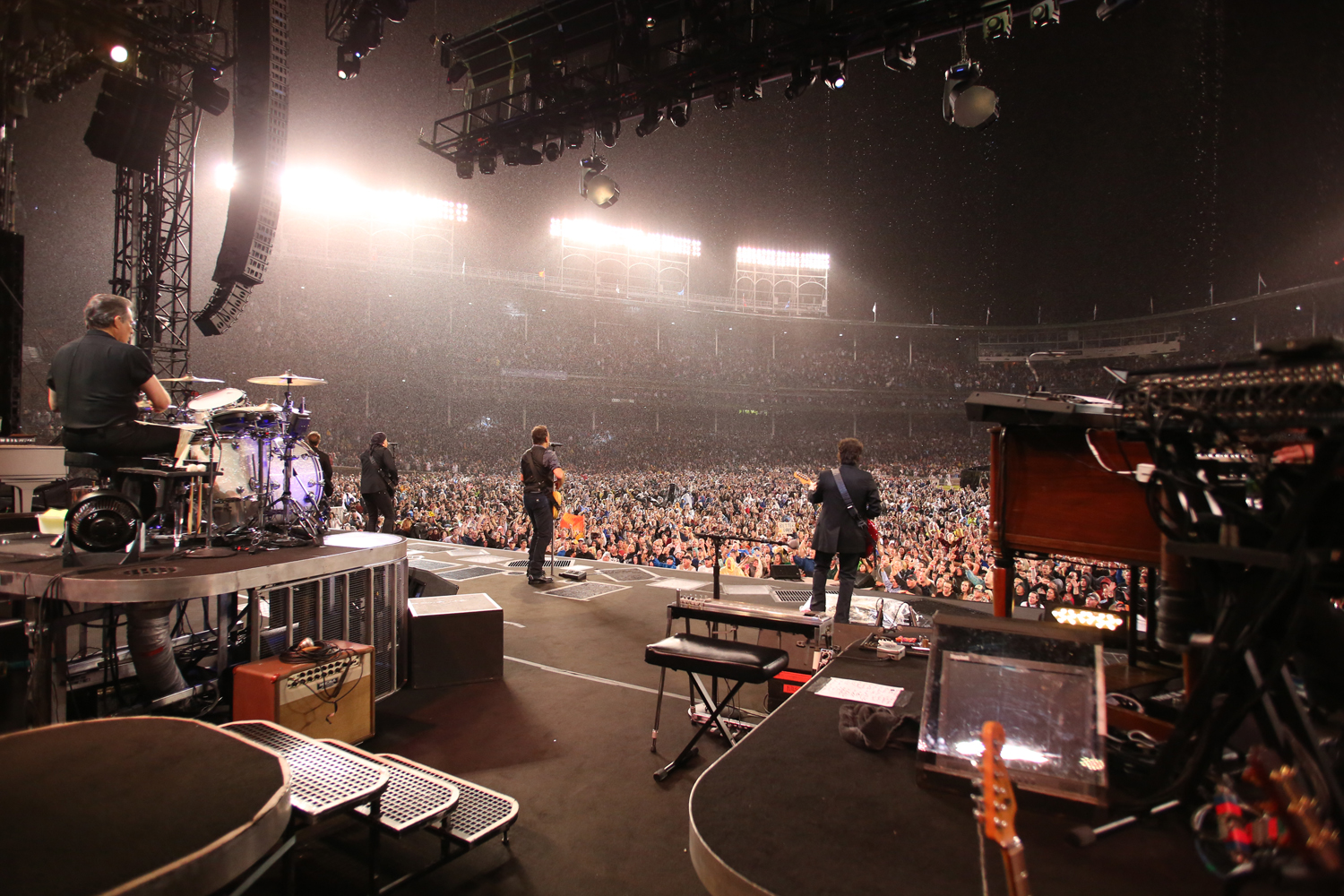 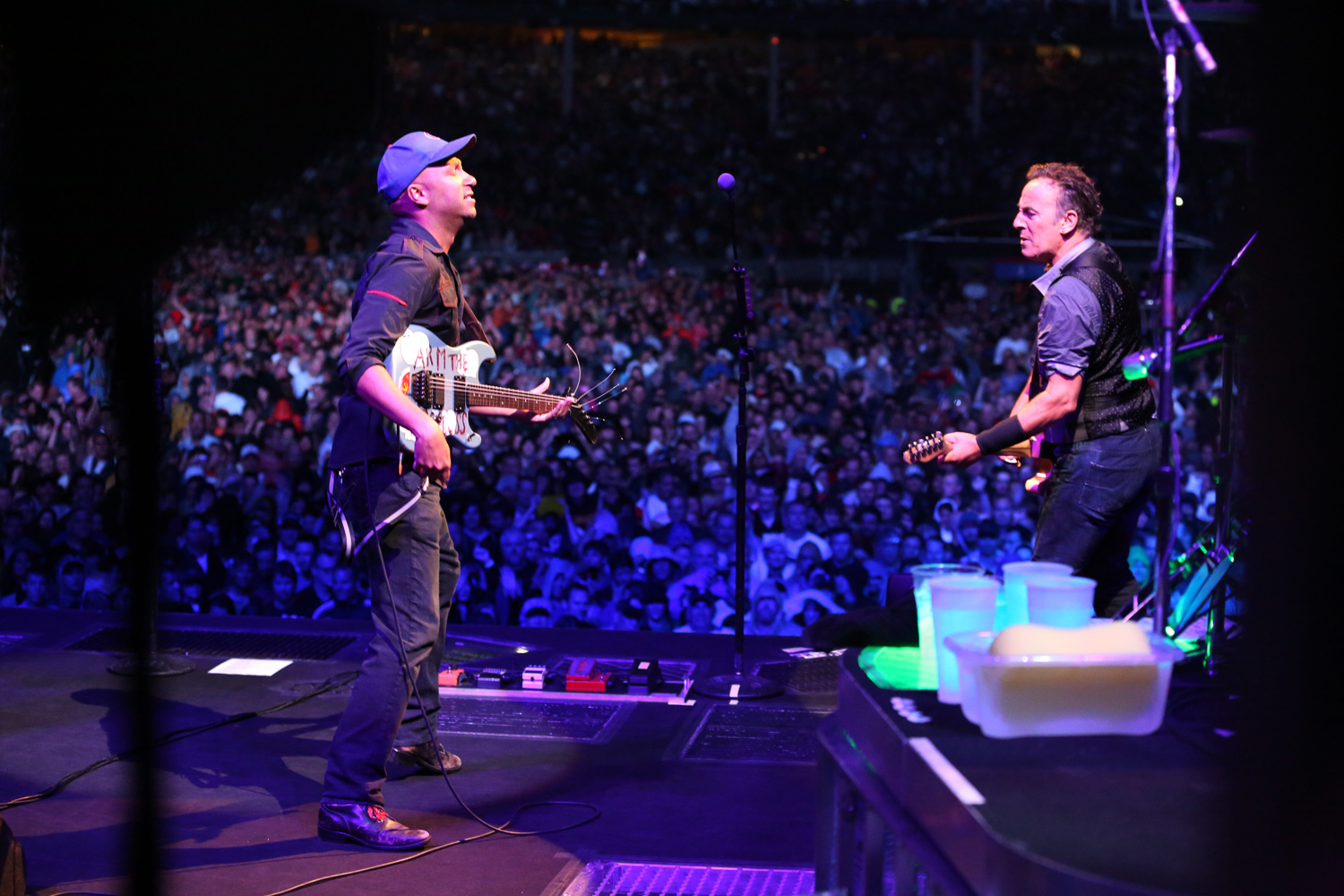 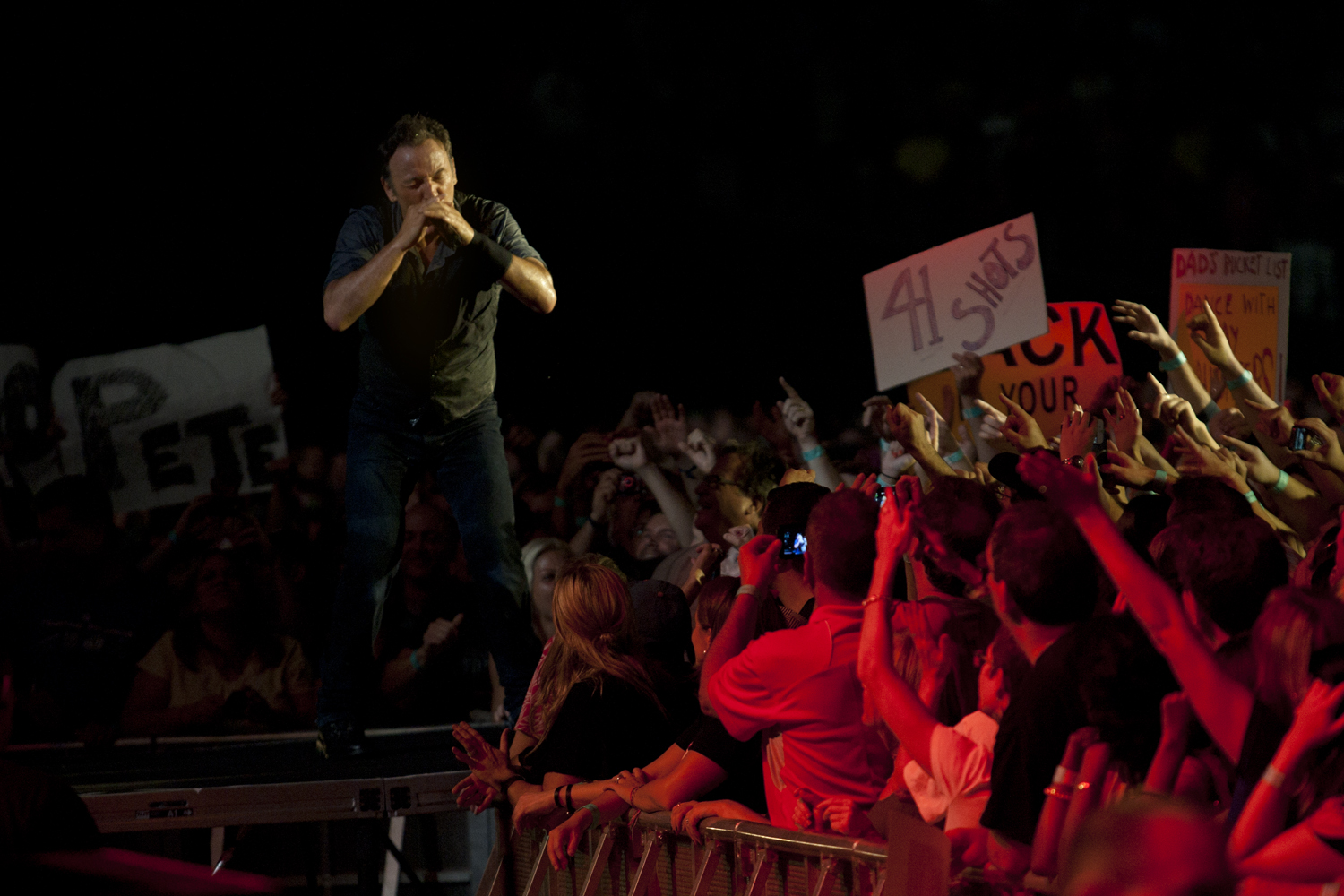 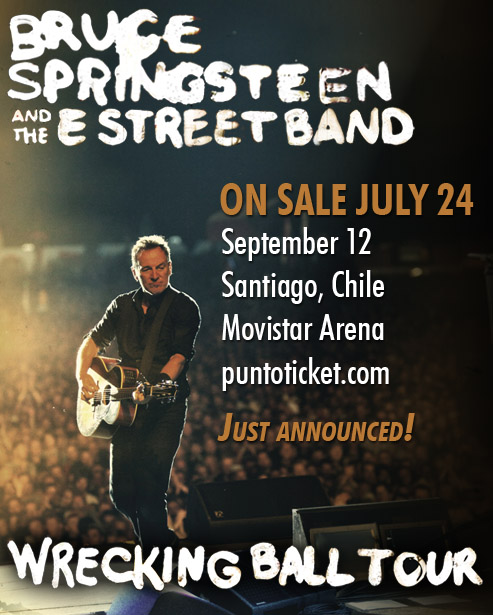 Notes from the road: Nijmegen