Notes from the road: Charlottesville, VA

Maybe it was because the show was their first on U.S. soil in a month. And maybe it was because it was in Virginia, where Bruce Springsteen played numerous gigs in Richmond in the early 1970s. (“Virginia was all that stood between us and starvation,” Springsteen told the Charlottesville crowd Tuesday night. “Virginia was one of two places where we could play!”) Maybe it was because of the approaching presidential election and Tuesday’s distinction as the first time Springsteen has combined a campaign event (the Obama for America rally in downtown Charlottesville where he performed six songs in the afternoon) and an E Street Band tour concert (this nighttime show at John Paul Jones Arena on the University of Virginia campus) on the same day. Or maybe it was just because it was — a product of the mysterious forces that sometimes lead great musicians to have particularly great nights.

Whatever the reasons, this was a special show. It possessed intense and urgent — at times even manic — energy along with, of course, the usual fun. It delivered to its amped-up audience a soaring set of fan favorites and rare nuggets. It showed off all of Springsteen’s best stage moves (the cross-stage slide, the crowd surf, the scary-limber back dip while clutching the mic). And it featured especially strong work by the band.

The show opened at 8:18 p.m. with “Shackled and Drawn,” which started with Springsteen chanting “Huh! Alright now! Huh! Yeah Yeah Yeahyeah” and ended with the entire band in a downstage line, swaying back and forth. It didn’t take long for Springsteen to enter the crowd, head up into the stands, and surf a sea of upraised hands back to the stage — the third song, “Hungry Heart.”

“Wrecking Ball” contained an amusing faux pas: The smattering of boos that greeted the lyric “and Giants play the game” was a reminder that this is Washington Redskins country.

Springsteen dug into Tracks for a pair of back-to-back rarities. “Seaside Bar Song” was a sign request. Next came the biggest surprise of the night: “Give the Girl a Kiss,” which previously had been played only a handful of times, in 1999 and 2009. The horn section didn’t seem ready for it, missing an initial cue from Springsteen as they learned it on the fly. But everyone quickly got on track (you still can’t stump the E Street Band), and the audience seemed to enjoy the uptempo number even though few seemed familiar with it.

This was a night of some searing guitar work. Nils Lofgren brought whammy-bar heaven to “This Depression,” and he also shined on “Murder Incorporated.” The latter song also sparked a good, old-fashioned face-to-face guitar duel between Springsteen on his tobacco-burst-colored Telecaster and Steve Van Zandt on his black Stratocaster. A boogying piano solo by Professor Roy Bittan and New Orleans-flavored trombone work by Clark Gayton turned “Johnny 99” into a thrilling vamp.

During “Working on the Highway,” an excited Springsteen threw his black acoustic guitar on the stage for his likely-surprised guitar tech to retrieve. Another amusing moment during “Waiting on a Sunny Day”: Springsteen, as always, picked a kid out of the audience to sing a chorus, but this time, a second young boy appeared — uninvited, it seemed. No problem: Springsteen stood between the two as the kids sang in unison.

After full-throttle performances of “Backstreets” and “Badlands,” the regular set ended with “Land of Hope and Dreams,” which remains potent despite its play seemingly thousands of times during TV promotions for the Major League Baseball playoffs.

First up for the encore: “Jungleland,” for only the fifth time on the “Wrecking Ball” tour, capping a great night for Jake Clemons, who earlier in the show did the “trail and wail” as he followed Springsteen around the stage during “Spirit in the Night.”

The final notes of “Tenth Avenue Freeze Out” rang out at exactly the three-hour mark, ending a show sure to keep Virginia as an important spot on Springsteen’s map.

Notes from the road: São Paulo 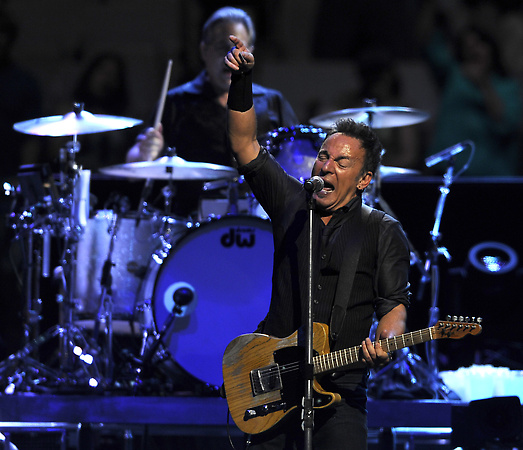